One of the most beautiful beaches you can find in Greece.

Achla Beach is undoubtedly one of the reasons you should visit Andros Island. In the northeast of the island below the village of Vourkoti lies a magical bay with emerald waters, fine pebbles, and sand. The designation as one of the most beautiful beaches of Greece is not random. It’s the special features that make her so unique.

The thrill starts before you even get there. So to reach this enchanting beach, you must first drive high in Vourkoti. No matter how hot the day is, approaching the village you will feel an aura of coolness. The dirt road that will lead you to your destination starts nearby. The road is not passable every year for conventional cars and depends on the island’s winter weather conditions. It is good to ask some locals about its condition unless you have a 4×4.

Driving down the landscape is unique. Approaching Achla beach, you will face a “castle”. It is the new Monastery of Agios Mamas that stands imposing in the middle of nowhere. It has been built on an older temple’s ruins and is part of Agios Nikolaos’ Monastery. A short distance from there after a turn of the road, you will feel awe as the beach reveals. Now you understand that the effort and time of the trip were worth it. In a short time, you will be at Achla beach.

The route to Achla beach by the sea is an exciting experience. You will start from the port of Chora on Nimporio beach. Leaving the pier, you will see Tourlitis up close to your right. It is the characteristic lighthouse on the rock that is the trademark of Andros. Throughout the route, you will have the island to your left and the endless blue Aegean right. Impressive rocks, islets and caves sculpted by nature for millennia.

You will meet other beautiful beaches of the island such as Gialia, Piso Gialia, Platanos and Theotokos. Mavropetritis, a rare protected species of hawk, finds refuge in Theotokos and on the rock with the church in September. Mavropetritis nests and reproduces there. As soon as his young hawks are qualified to fly, he begins his journey to spend Madagascar’s winter. Entering the beautiful closed bay of Achla beach, you will want to dive before stepping on land.

If you are a fan of hiking, you can reach the beach following hiking trail 6. It’s an impressive rural route that follows the homonymous with the beach river Achla. You will find well-made agricultural inns (kelia), the magnificent arched bridge of Achla, the old castle-monastery of Agios Nikolaos ending at the beach. The trail’s difficulty is characterised as medium to difficult in some places, with a distance of 9km and an altitude difference of 670 meters. It starts under the tavern in the village of Vourkoti.

Achla beach is not just the beach.

Achla beach is awe-inspiring, and its turquoise waters are calm even with a strong wind. On one side is the church of Agios Nikolaos and at the other end is the imposing lighthouse of Gria, which at night “scans” with its light the beach from end to end.

But it is not only the beach. An extensive wetland stretches behind it as the river Achlas, one of the three largest rivers of Andros, flows there. Its waters spring from the slopes of the mountains of Vourkoti and run until August. A magical route awaits you with the impressive plane trees that stretch a breath from the beach. A green valley with small waterfalls and pedestals that are suitable for swimming under the age-old vegetation. Depending on the season you will find freshwater crabs, eels, turtles, hares, migratory birds and colourful dragonflies.

Achla beach is a rare phenomenon in the Cyclades and one of the most important reasons to visit Andros Island! 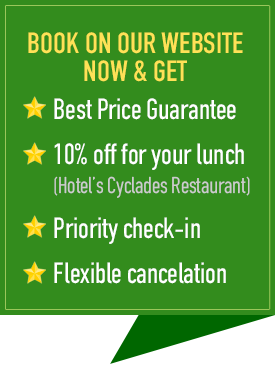