A tour to the largest monastery on the island

Andros is famous for its monasteries, many of which are very old and miraculous, with a long history and tradition. Every year, believers come from around the world to visit them, developing the religious tourism of the island. You will find monasteries that survived with faith, through disasters. Some of them preserve respectable skulls and relics, images of saints with holy myrrh, old heirlooms and rare libraries. Another one, have remarkable architecture, reminiscent of a castle, with incredible wood-carved details in the interior as well as their decoration. The monastery of Zoodochos Pigi in Andros, honours the Christian tradition and is worth visiting during the Easter days and afterwards. Especially on the first Friday after Easter Sunday, where the monastery celebrates.

The Monastery of Zoodochos Pigi and its history

The Zoodochos Pigi Monastery is the greatest monastery on the island, and it dominates like an imposing fortress between Gavrio and Batsi, just 7 km from the port of Gavrio. It is unknown when it was built. Tradition says it began as a Byzantine school and later in 842 it was established as a monastery, according to Dionysos Bistis of Andros and the metropolitan of Xanthi during the period (1861-1867). The proof that the monastery was in operation in the 14th century comes from a silver image with a written date on it, setting as the first official date in 1325, while there is also a monastery document which refers to January 31, 1400.

The monastery keeps rare images of 14th and 16th century, a library full of books and manuscripts, and a museum with sacred objects, vestments and a small collection of prehistoric tools. Its church is of Byzantine style, with a wood-carved icon screen and painting decoration, dating back to the post-Byzantine period. The monastery of the “Saint”, as the locals call it, celebrates the first Friday after Easter Sunday

It is believed that the monastery was destroyed when the Franks abandoned Andros and it was renovated immediately afterwards (maybe 1578) by the monks Makarios Delagrammatika and Stratoniko Stratigopoulos. It was not long to flourish when it accepted the new monks. In 1603 and 1717 the influence of the monastery was enhanced by works.

The monk Ioannikos and apparently a member of the “Filiki Eteria”, from 1819 until 1831, cared for its fortification. The monk, spending his own and the monastery’s property, built new cells and other rooms. In the monastery, as in other monasteries, women were forbidden to enter. According to testimonies, towards the end of the 17th century, the monastery had 100 monks, and the number dropped by half in 1836, while in 1928 the monastery turned into a female monastery and remains so until today. 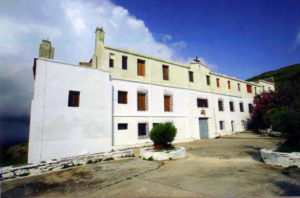 According to tradition, the construction of the Monastery of Zoodochos Pigi or Agia, it is due to a miracle. The vision of a simple man, who was thirsty and he was trying to find some water; he saw the Virgin Mary showing him the point where the monastery must be built. At that time, the workers were working to build a monastery, further north of the position. Every night, they lost their tools or disappeared mysteriously.

A resident of the area with problems in his sight, passed from there thirsty and looked for water. Suddenly, he saw a goat pass by his face, with a wet “beard”. Immediately, he realised that somewhere there was a source. When he arrived at the source, a woman appeared in front of him, and he told her about the problem he had with his eyes. She told him to wash them, with water from the source to be cured. Miraculously his eyes were healed, and the woman revealed that she was the Virgin Mary. He asked him to tell the workers to give up their effort and build the monastery in its current location and so it’s done. Τhe monastery was named Zoodohos Pigi, after the water source.